Empowering Women leads to Climate Justice and maybe Salvation for All 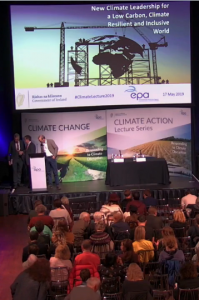 Watching Dr Edward Cameron speak at the annual EPA lecture in the Mansion House, Dublin on Friday 17th May brought home some uncomfortable facts to me. To my mind, Ireland has generally been an equal opportunity country, with talent and determination (and maybe luck) anyone can be anything. And is this being replicated around the world?

“Not so”, says Dr Cameron, and he has the statistics and reasons to prove that Ireland is a rarity in equal opportunity, and these inequalities may cost us the World. On average more women died in 121 natural disasters (floods, typhoons) between 1981 and 2002 than men, and more poor and coloured women than white women.

Women are less valued than men in many societies and cultures despite working harder; two-thirds of illiterate people in the world are women resulting in lower skill levels, less access to justice, and decision-making groups; many girls never learn to climb trees or leave their home, women never leave homes without a male guardian, always stay behind to mind children, elderly parents and disabled; men own the mobile phones and get the first warning. The list goes on and on. More than 150 countries actively discriminate against women.

Gender perspective plans are urgently needed for resilience building to address the multiple, over-lapping and mutually reinforcing structural inequalities, power dynamics and social and cultural expectations that create the day-to-day reality for women in every community around the world. Women best know what women need. And these plans are essential to minimise the worst effects of Climate Change.

That is why the Green Party promotes equal opportunity for everyone, and why I’m asking you to give your #1 vote to your Green Party candidate, whether woman or man – For Europe: Saoirse McHugh (Midland-North West), Grace O’Sullivan (South) and Ciaran Cuffe (Dublin) and For the DSC City Locals: Sophie Nicoullard (Ballyfermot Drimnagh), Michael Pidgeon (Dublin SW Inner City) and Cllr Patrick Costello (Kimmage Rathmines)   –

This entry was posted in Green Politics. Bookmark the permalink.