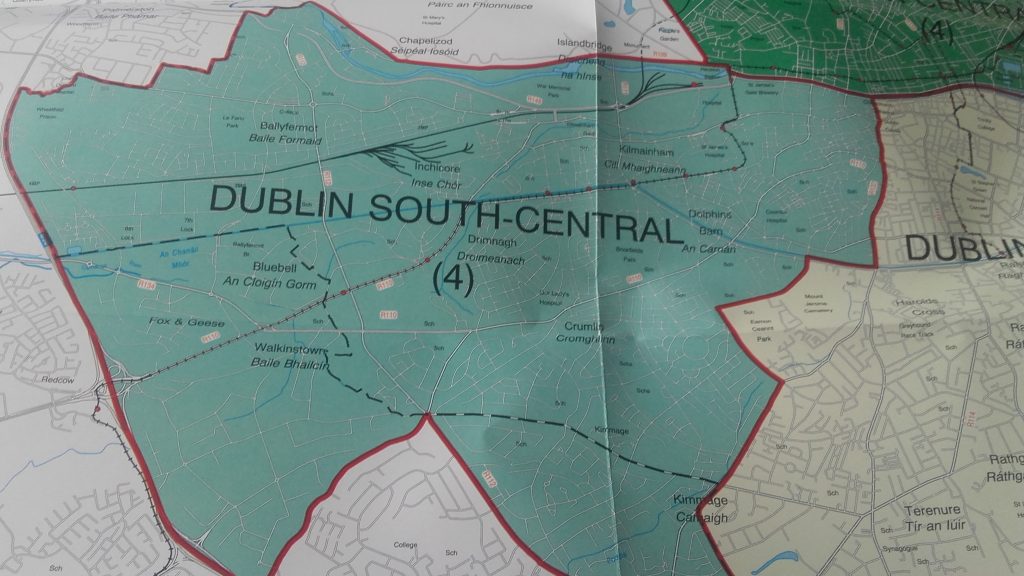 Welcome to the September edition of the DSC Green Party group. The Dail constituency area is roughly bounded by the north bank of the River Liffey, Cunningham Road to Chapelizod village, Palmerstown is out but Ballyfermot is in, south along M50, east and north around Tymon Park and Templeogue R112 to Kimmage and north along the River Poddle, Sundrive, Clogher Roads to the canal and east to Harold’s Cross Bridge and north to Christ Cathederal and the Liffey. There are few straight lines as estates are in or out. There are two Dublin City Council wards within the constituency.

As the man said: “If I was going there, I wouldn’t start from here”. Dublin is an old medaevial city; the Wide Streets Committee tried to overlay straight streets and right-angle corners, (like Dawson Street, Dame Street, O’Connell Street, Talbot Street) on the old crookedness, but the old streets remain around Temple Bar, Digges Lane, and streets like Grafton Street curve to connect and avoid old buildings like City Hall, Trinity College, the Rotunda, Christ Cathederal.

We are not anti-car but believe private cars, whether electric or fossil-fueled, should not be allowed to access Dublin city centre, except in emergencies. The modern, clean friendly way – electrical/biogas buses, Luas, Dart, hybrid-taxis, with safe pedal-cycle- and pedestrian-only routes. Night-time deliveries. Priority public buses with less cross city routes. Frequent local bus routes connecting Luas and Dart stops with village centres and estates & appartment complexes. Free car parking for commuters at out-lying Luas & Dart stations. Greenway and pedal-cycle/ pedestrian-only routes along the Liffey, the Grand Canal. Stop illegal parking of cars on cycle lanes and footpaths by allowing/planning for free off-street parking in house-gardens and appartments. So many people work or study in Dublin, don’t need to drive during the week, but use their car at weekends to go home.

Parking Day, Friday 15th September 2017
Parking day takes place again this year.  This is the day when parking spaces across the city are turned into mini-parks.  More at their FaceBook page https://www.facebook.com/parkingdaydublin/?mc_cid=5c3e043295&mc_eid=4db1b4b49e

Composting Workshop, BridgeFoot Street, Saturday 16th September 2018
Free composter workshop in bridgefoot St. Garden on Saturday 16th of Sept at 10:00 ..tea provided but bring your own packed lunch ?... Stop Food Waste volunteers are going to be on hand to help

Repealing the 8th Amendment
An invitation has been received to a working meeting upstairs in Arthur's pub on Thomas Street Dublin 8 at 8pm on Monday 18th of September.  The purpose of the meeting would be to establish a broad group to campaign on repealing the 8th in the Dublin South Central constituency.

The annual March for Choice will also be taking place on September the 30th and it would be great to get as many people from our own area in to the march.

Happy City book recommended as a ‘good read’ by a member.

‘The Oceans after Nature’ exhibition at the Hugh Lane Gallery was recommended by another as worth visiting. “The Ocean after Nature considers the ocean as a site reflecting the ecological, cultural, political, and economic realities of a globalized world through the work of twenty artists and collectives. These internationally established and emerging artists explore new ways of representing the seascape as a means to identify and critique the various interrelated and chaotic systems of power, such as land-sea divides, the circulation of people and goods, and the vulnerabilities of our ecosystems.”

We have agreed that pub evenings with craft beer on tap is a good Zero Waste experience and endeavor to organise social evenings for members. So keep in touch.

The Scottish government is taking action against plastic pollution by introducing a Deposit Return Scheme! Deposit Return Schemes work by adding a small charge to the cost of a drinks bottle. When you return your bottle to be reused or recycled, you get your deposit back! 5c maybe be nothing to you, but 5c x 20 or x 100 is a big deal for school kids or charity volunteers, just imagine being paid to walk to school through the park!!!

What can we do to reduce Plastics: https://www.theguardian.com/environment/2017/sep/08/our-plastic-addiction-out-of-control-cut-consumption-now?CMP=share_btn_link

An Lianadh Transition Initiative for Dublin is convened by Kristina McElroy, former secretary of the Dublin South Central Greens.  They can be found here on FaceBook and are well worth a follow https://www.facebook.com/An-Lianadh-Dublin-City-Transition-Initiative-139413396598167/

This entry was posted in Environment, Events, Green Politics, Uncategorized and tagged Community. Bookmark the permalink.