I’m a ‘Live & Let Live’ observer. I’m not ‘Black & White’, more ‘all shades of grey’ or ’40 shades of Green’. An independent thinker with a global view. Not a party hack or a ‘flat-earth populist’, or a sugar-coater – ‘nothing to see here, move along please’. 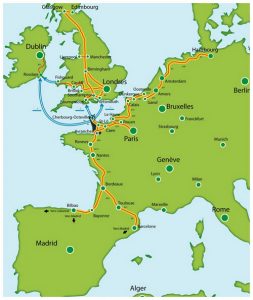 I’ve spent 40 years driving across European borders. I’ve seen them all. From being stuck in ‘no-mans-land’ ‘tween Hungary and Yugoslavia, back in 1980, while each side closes for lunch – can’t go forward, can’t go back, no shelter, barbed wire, are there mines offroad? Or the EU-Turkish border in Cyprus – a rusty fence, park car, walk to kiosk, passport scanned & stamped, return to car. Or the EU borders with Belarus, Russia or Kaliningrad which on a good day take 4 hours to cross; 1) Passport Check, 2) Vehicle Check, 3) Luggage Check, 4) a man who checks the checkers before you leave the borderzone. The Estonian entry once took longer than the Russian exit! But the last trip was a dream – No passport huts from the Hook of Holland ferryport through Netherlands, Germany, Poland, Lithuania, Latvia, Estonia until Tallin ferryport to Finland!

But the borders we know best are by road to Northern Ireland or ferry to Wales, visiting friends and relations, football or shopping – the Free Travel Area which survived an independent Republic of Ireland! Will travel continue to be seamless after Brexit? The politicans all agree – two islands joined by common languages and history of trade – ‘No Border, No Problem’. But the faceless, nameless bureaucrats are rubbing their hands with glee – checks and more checks, visas, carnets, stamps & quotas. Where is the EU frontier, where are the movement control huts? where is the clorinated chicken?

We need to elect politicans who will leave their ideological comfort zones and tell the bureaucrats the Irish solution is  ‘Free Travel & Trade North & South, East & West’. This might best be achieved by an immediate bilateral trade deal with the blessing of the EU, and similar to the bilateral deals between eastern EU states and China (Irish Times 28/11/17).

The EU problem is in the EU, forget about frontiers. Solve the problem of 27 countries with 30+ languages, 27 sets of regulations, protected national champions, etc – No Google, No Facebook, No Tencent, No Gazprom – Why? Brussels & Berlin forget how hard life is on the periphery at times for the Irish, the Greeks, the Finns, the Portguese. If a UK frontier is needed, let it be at the English Channel/La Manche & North Sea ports with an express lane for Irish vehicles taking the direct land-route!

Does Ireland have the scale to join the EU Circular Economy? USA/Canada again!