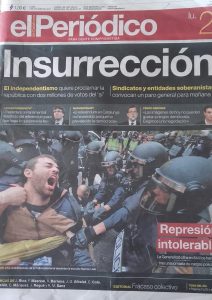 My week in the sun coincided with the independence referendum in Catalonia. Despite a crash course in Catalonia’s 1,000-year history – from a buffer zone between Christian France and Muslim Spain to being a major player in the Spanish Civil War. The Catalan Republic fought against Franco’s nationalist army and in the 36 years afterwards suffered Franco’s revenge. After Franco’s death in 1975, new generations continued the struggle for independence from Madrid through parliamentary means. Domination by the Madrid government over the centuries seems to be the major issue.

In some respects, the Catalan struggle mirrors the struggle for Home Rule between Dublin and London in the 19th century. But in the 21st century Europe, conservative centralism attempts to stifle dissent by minorities by way of threats of legal barriers and threats of financial and commercial chaos on those who would ‘rock the boat’. To quote Alberto Alemanno, Jean Monnet Professor of Law, HEC Paris  “due to its natural hostility towards citizens’ input, the EU is particularly vulnerable to political actors speaking on behalf of the people”. There are always at least two sides and various extremes – authoritarian and libertarian – democracy is not 50%+1, dialogue takes at least two voices and consensus must allow all parties to ‘live & let live’.

There is the example of the Dissolution of Czechoslovakia, which took effect on 1 January 1993, an event that saw the self-determined split of the federal state of Czechoslovakia into the Czech Republic and Slovakia. The Irish Times of Saturday 14th October has several interesting articles on the Spanish situation and probable future developments in the EU as the centre faces multible local demands for independence – the stress of the plurinational states.